Please login to give the feedback.

Please login to give the feedback.

We have sent you a verification email. To verify, just follow the link in the message.

Automation is taking a key role on the manufacturing floor to improve quality, production, and to stay competitive in obtaining contracts.

Automation, whether a Robot, Gantry, or Pick and Place Load device, provides consistency in the Load/Unload Operation. It can operate continuously, thus reducing downtime and allowing management to concentrate on key areas of production.

Many people have felt threatened by automation in the sense that it would be replacing them. However, this has proven wrong. Automation has kept us competitive with other countries that have much lower labor costs. Plus, it has also created new and safer career jobs…making manufacturing a much more appealing career.

However, in many instances companies take the wrong approach and jump into
the automation trend with little thought of all the aspects of integration with the machine, tooling and fixturing. To avoid this mistaken approach It is always wise to consider visiting companies that have taken the path to automation and learn what obstacles they have had or mistakes they have made…and then learn from their solutions. 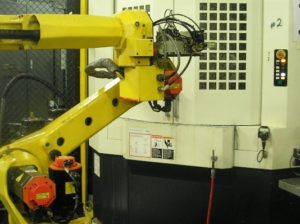 One of two Horizontal Machining Centers with a single robot for load/unload of parts.

Many prefer to go to the Machine Builder or Dealer who have the personnel to provide a turnkey proposal. Since communication must pass through the machine control, it is recommended that machine personnel lead the project and do the integration.

In addition, through the Machine Control the workholding device has to communicate with the machine as well as the automation regarding such
actions as:

These specific actions allow or disallow certain actions of the machine and automation.

Be certain to consider all the possibilities and requirements prior to installation.

By not doing a thorough sequence of events…including all the options and possibilities… could possibly lead to a poor and disastrous installation.

Certain actions are a must, such as:

We would like to express our sincere appreciation for your service to us.You have provided us best marketing platform through CNCTimes. We look forward to extending our contract with you for years to ...

Seminar was really very good, please let us know about future seminars. we would like to attend the seminar on "Machining of the material above 60 HRc like titanum"